‘International division of labor’ and ‘mass production’ are not always the winning globalization strategy anymore.

Not a few MNCs (Multinational corporations) start to search a new globalization strategy.

Some try to adopt the globalization strategy of GAFA (Google, Amazon, Facebook, and Apple), but they are not sure if it works, yet.

In this column, I would like to explain why the conventional global strategy is getting outdated.

4 styles of business globalization in 3 eras

Let me start with defining the globalization of business.

We witnessed and are going to witness 4 styles of business globalization in 3 eras;

The dividers of the eras are the engine of globalization and the type of market.

The WW II divided Era 1 and Era 2  by changing the engine from empires to private MNCs, although the market is the same — few mega markets of developed countries.

The globalization of Era 1 is;

Both the Roman Empire and the British Empire are the examples of this globalization style.

After the MNCs take over the position of the engine, the globalization becomes;

This style peaked from the latter half of 20th century to the beginning of 21st century when the Japan, followed by NICEs (Singapore, Hong Kong, Taiwan and South Korea), ASEAN countries and BRICKs, rose as production countries.

During this time, only developed countries in Western Europe and North America are the mega markets, although Japan market joined in 1980s.

Many people say that a characteristic of globalization is borderless, but it is wrong.

The globalization of Era 1 is to expand the boarder of the sovereign country.

Also, the globalization of Era 2 is to make most use of the gap between 2 areas divided by the national borders.

Era 3 starts when the countries in production areas become the mega markets as well.

The key point is that the markets do not move from developed countries to emerging countries, but that the number of mega markets increases rapidly.

In Era 2, MNCs could sell few types of products in large quantity to only a few mega markets in developed countries whose preference and needs are relatively similar.

However, MNCs now needs to prepare variety of products to satisfy many mega markets whose preference and needs are verified.

To adapt to this situation, GAFA have build one of globalization styles in Era 3;

GAFA try to make their platform as attractive as possible to increase participants, both sellers/producers and buyers/consumers.

The more sellers/producers join to the platform, GAFA can obtain more variety of products which attract more buyers/consumers.

This globalization style fits well with the era of multi mega-markets.

However, the platform has to be so novel to attracts participants.

In addition, MNCs have to build the system in which the participants are willing to provide their own private data, namely Big Data.

Instead of following GAFA, many MNCs will need to find the globalization style which does not require the Big Data;

This does not merely mean that a MNC has many overseas branches.

Each overseas branch pursues the optimization at its market while cooperating and exchanging information and ideas super frequently with other overseas branches, such as;

We are given the era, but not the globalization style.

Since the MNCs become the engine of globalization, the globalization style is also the strategy which an individual MNC can choose;

To decide the strategy, I will explain the choices a bit more from the perspective of organization structure. 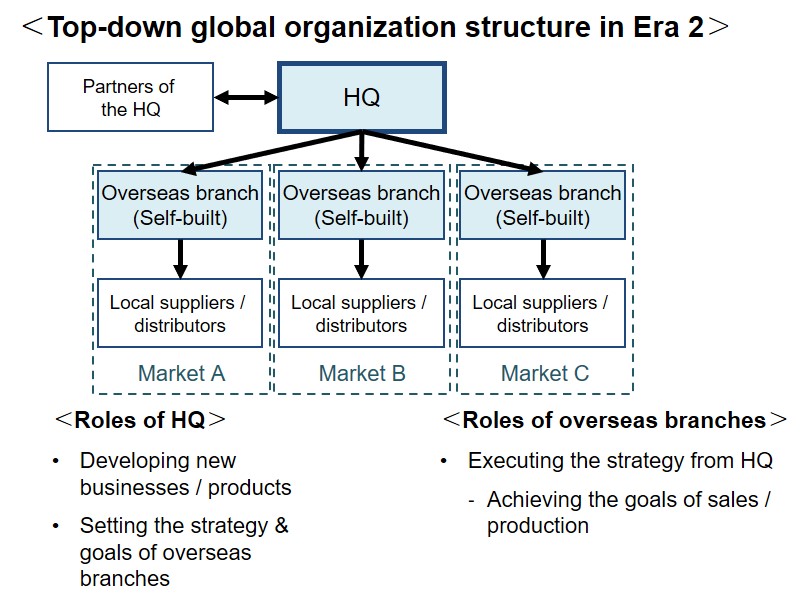 The HQ is usually placed in the biggest market for the MNC, and it makes all the products targeting the market.

The MNC makes a minor change to the products for other markets.

The overseas branches in the other markets focus on sells given the target from the HQ.

The MNC builds its factories in the place where it can expect the lowest cost.

The HQ makes the production plan, and the factories follows the plan.

The key characteristics of this organization structure are;

The Platform-style organizations like GAFA evolve ‘Centralization of control to the HQ of the Top-down organization structure; 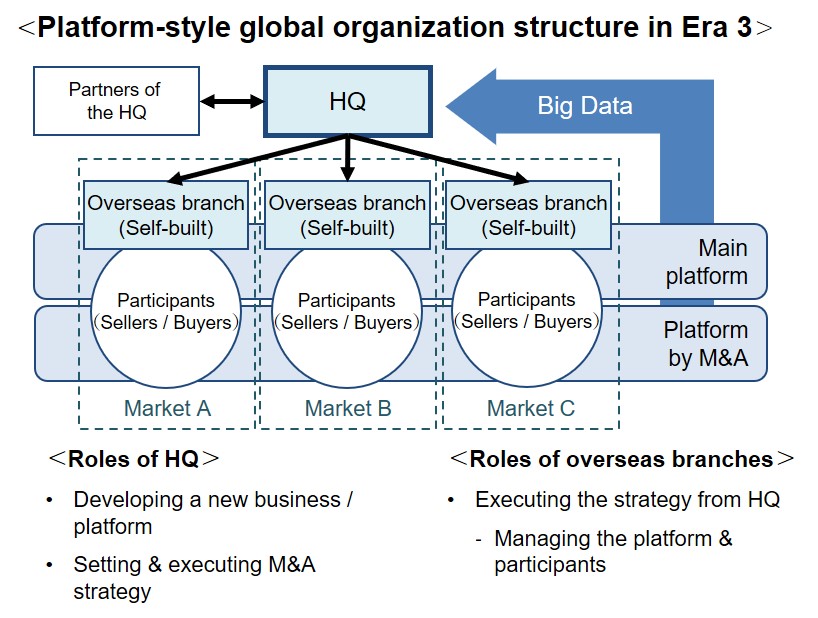 The HQ develops new business, new technologies, annual targets and action plans from the Big Data, and implements them globally.

Another difference from Era 2 is the way to expand globally.

The organization in Era 2 expands its business by long-time contracts with suppliers and distributors.

The Platform-style organization expands by increasing the participants to its platform.

They are usually keen to M& A of other global platforms as the acquired  platform can bring more participants.

The roles of overseas branches are not much different from the ones in the Top-down organization structure.

On the other hand, overseas branches will take much more roles in the Networking-style global organization structure; 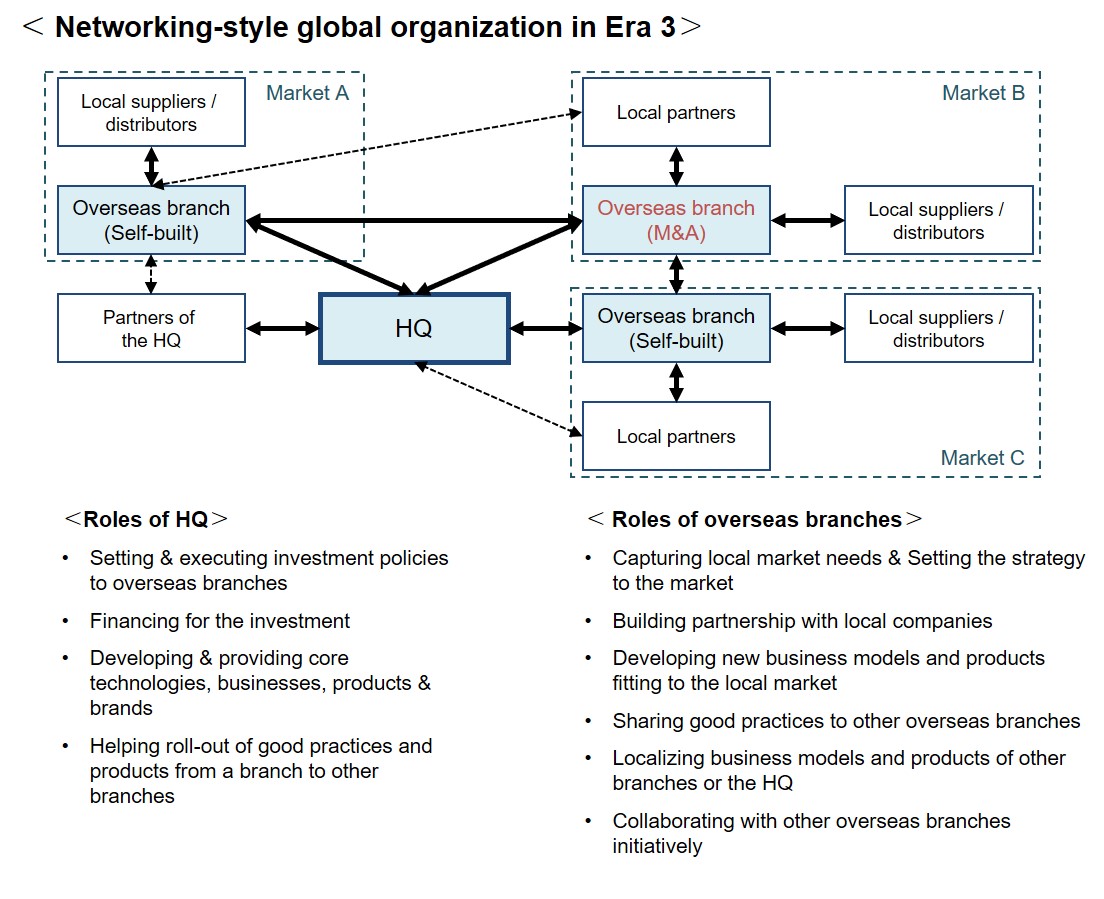 This structure evolves the other characteristics of the organization of Era 2, — ‘collaboration among overseas branches,’ but it is totally different from ‘international division of labor.’

This organization structure encourages the overseas branches to collaborate each other without the orders from the HQ.

The overseas branches need to step up from mere executors of the HQ’s strategy to the independent-minded business innovators.

The HQ becomes a coordinator to accelerate the collaboration and information sharing among the overseas branches, instead of being a commander as seen in the Top-down organization.

Globalization is not one long history of erasing national borders.

Instead, globalization (especially, of business) is the system (s) of the engine and the markets crossing national borders, and the style of globalization changes over the times.

Since Era 2 when MNCs become the engine, the styles mean the strategies which the MNCs can choose.

However, not many MNCs can follow the Platform-style without Big Data.

Nor, in the era of multi mega-markets, not many MNCs can grow globally in the long run with the Top-down organization structure.

So, in the next column, I would like to explain how to manage Networking-style global organization, and how to develop talents fitting with this type of organization.