In order to survive multi mega-markets world, I recommend the Networking-style globalization strategy for most of MNCs in the last column;

In today’s column, I would like to discuss how to manage the Networking-style global organization, and how to develop talents fitting with this type of organization.

In a Top-down global organization, the HQ manages its overseas branches like a track race.

The HQ sets the goal (sales and productivity) and regulations, and the overseas branches try to reach the goal with the similar methodology.

On the other hand, the Networking-style global organization should manage the overseas branches like a film competition.

To win the award, film makers can make whichever of drama, comedy, SF, or documentary as long as they think it is the best.

Likewise, in the Networking-style global organization, the overseas branches appeal to the HQ and other branches with a variety of value-added practices.

The award-winning value-added practices should not be limited to sales and productivity.

The award is the investment from the HQ.

The more contribution a branch makes (or is going to make) with various ways, the more the HQ invests to the branch.

In this sense, this is not management but encouragement.

The HQ should stimulate its overseas branches by sharing a good value-added practice from one branch to the other branches as quickly as possible.

For winning the award

For gaining the investment more, an overseas branch needs to know its positioning among other branches, in the first place.

The key criteria to know the positioning are capabilities of the branch and market attractiveness the branch is in charge of; 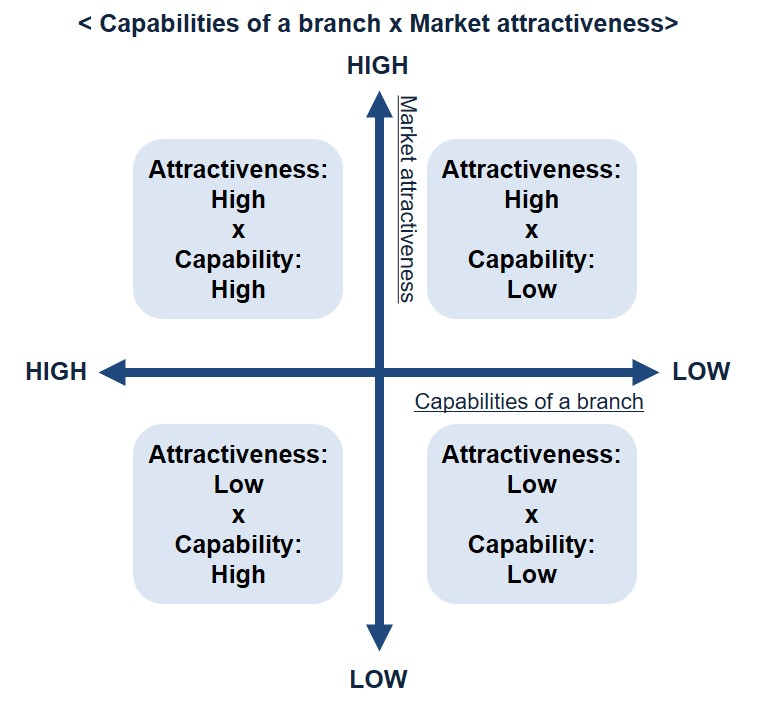 As an example, let me describe the positioning of a Hong Kong, a Taiwan, and a Thailand branch of a Japanese MNC;

The HQ invests a lot to its Thailand branch, as Thailand is a good growing market with relatively low labor cost and political stability in these several years.

Japanese MNCs saw Hong Kong and Taiwan was in the similar situation in 25yrs ago.

However, the HQ has decreased the investment to the Hong Kong branch and the Taiwan branch for these 25years along with the slowdown of the market growth and the higher labor cost.

The less the HQ invests, the weaker the branches become. 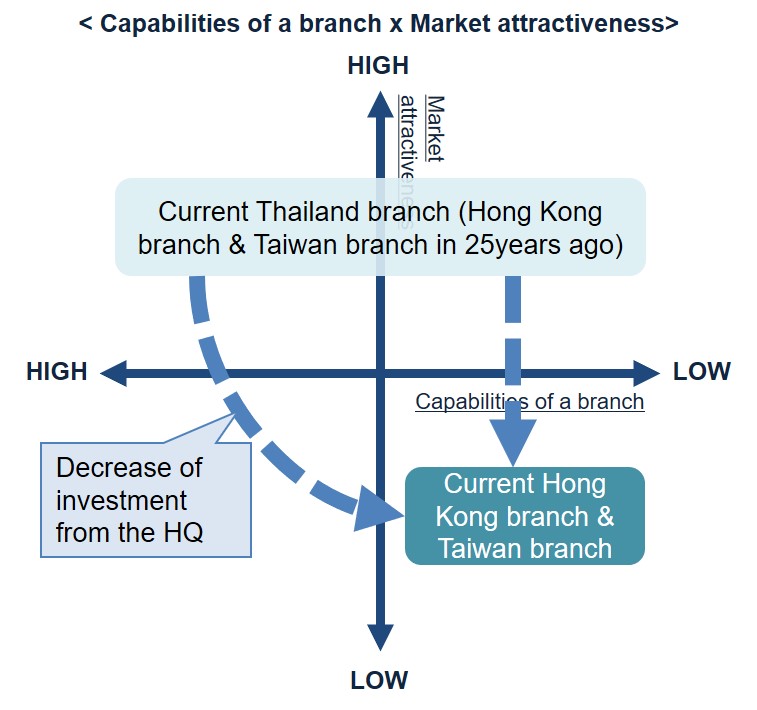 By understanding the positioning as shown in the example, the branches need to build their strategies.

The Thailand branch should find the strategy to keep the current market attractiveness while gaining the higher capabilities.

The Hong Kong branch and the Taiwan branch are in more difficult situation as one company cannot change the slow-down of the economy or the high labor cost.

However, a good thing about ‘Film Competition’ is that the HQ does not focus only on sales or on productivity for giving the ’award’.

Hong Kong and Taiwan have many good local companies with attractive technologies and products.

By partnering with them, the branches can strengthen their capabilities.

In addition, sharing the local partners with other branches will be a good value-added action as well as a good display of the market attractiveness.

Also, Hong Kong and Taiwan is rich with talents who have good education and multicultural experiences.

This can be another market attractiveness if the branches hire and develop the talents to contribute to the MNC as a whole.

The picture below shows the general direction of a branch and the HQ in each positioning; 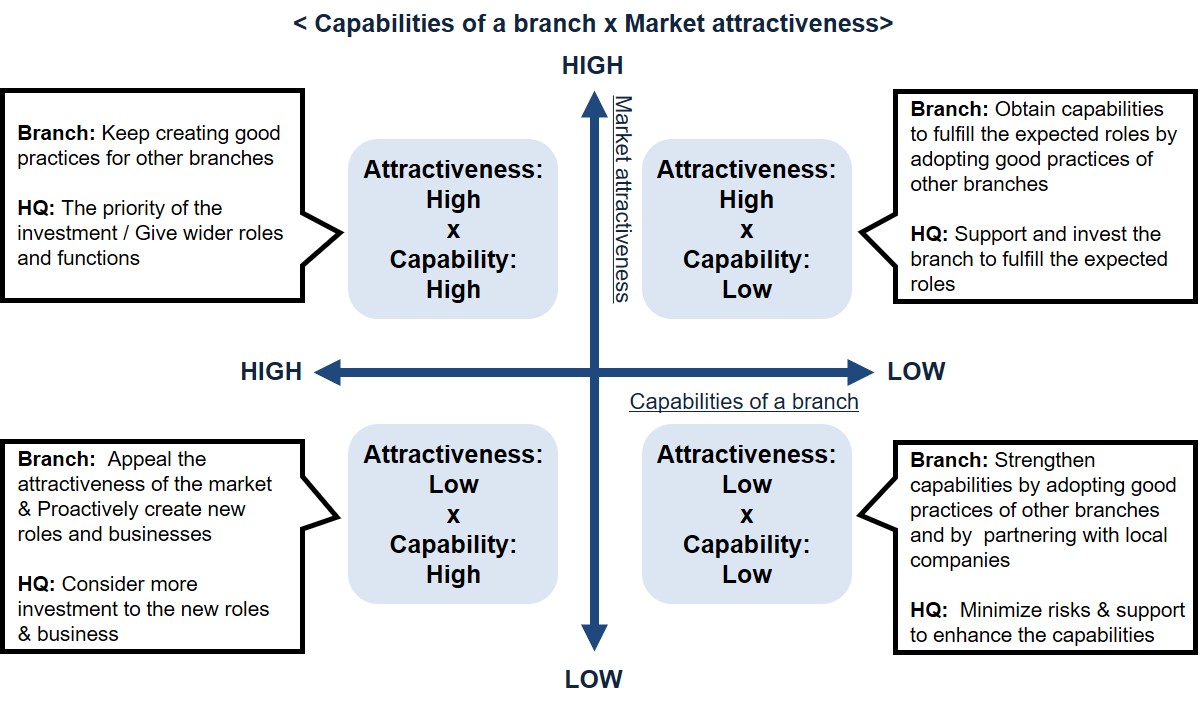 Inviting the members of overseas branches to ‘Film Competition’

In other words, the members of an overseas branch have to be highly motivated toward ‘Film Competition.’

The order and numerical targets made by the HQ does not work well for it, especially when the HQ gives ‘a tiny role’ to the branch in the HQ’s ‘script.’

For motivating themselves, the members need the own vision and story of their branch, in which they can play the ‘main roles’.

In addition, the members themselves should write and agree to the vision and story by themselves based on the positioning of their branch.

The picture below is a part of our consulting approach, showing the 3 basic elements that people expect from their work; 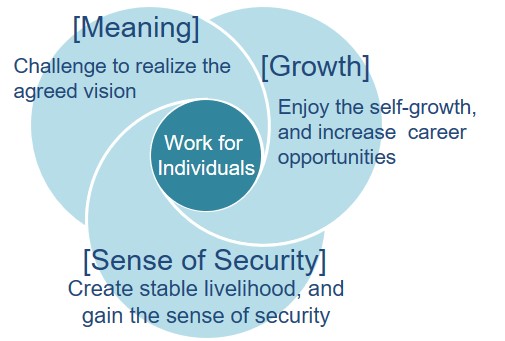 The bigger the total of 3 elements is, the higher the work motivates the member, although the proportion of 3 elements will change by each member or by his/her life stage.

If they are communicated well, the own vision and story affects to the elements as described in the picture below;

For this purpose, the organization needs to dissolve;

The key solution is placing HQ functions at overseas branches.

In each function or line of business, each overseas branch assigns one member to a global committee in which the members discuss, adjust, and solve the organization-wide problems and opportunities.

The global committees function as HQ.

The members should be Geographical T-shaped talents; 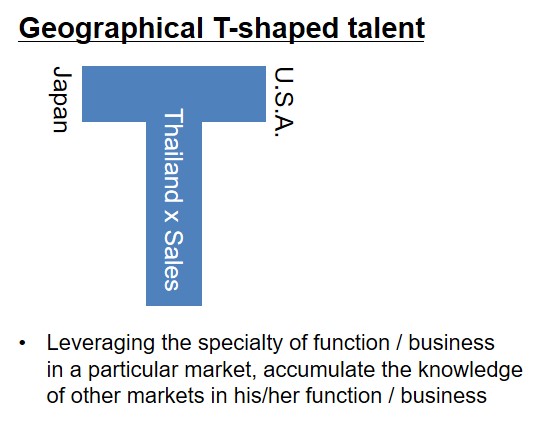 The members do not have to gather at one location.

Instead, they stay at their own overseas branches in order to keep updating the market information, new practices and ideas of their branches, and to deliver them to other global committee members as quickly as possible.

Thus, they take care of their function / business activities in the branches with Functional / Business T-shaped talents; 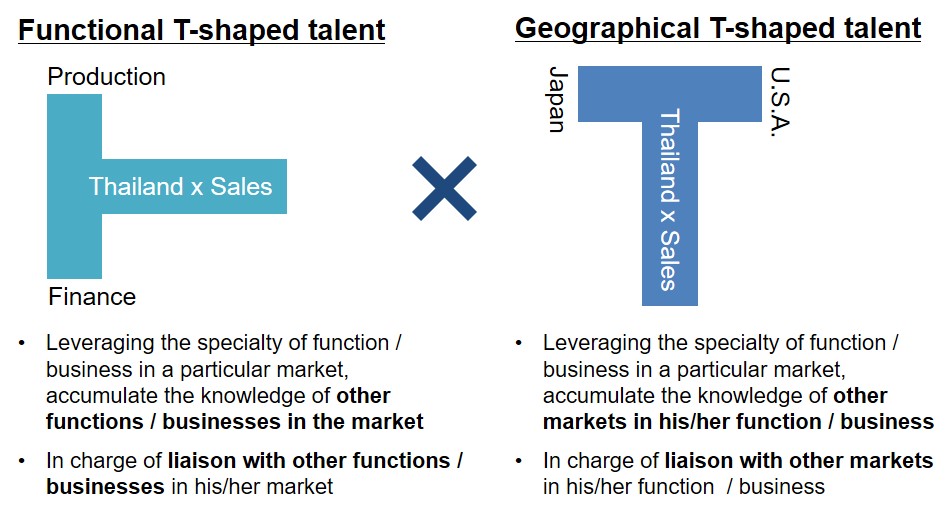 However, not many MNCs can afford such highly capable talents enough to place all the function head positions of all the branches.

In a branch, a Geographical T-shaped talent shares the discussion contents in the Global Committee to a Functional / Business T-shaped talent, and discuss the best actions the branch can choose.

By doing so, the members of the unit learn to balance the local market view and the total optimization view, from their early career stage.

Also, they will need to work with the members of other overseas branches for the tasks of the Global Committee.

This will expand their overseas network, which will be the benefit especially for future Geographical T-shaped talents.

For the members of overseas branches, either a Geographical T-shaped talent or a Functional / Business T-shaped will be their initial career goal.

Thus, their career development paths in the organization is like this; 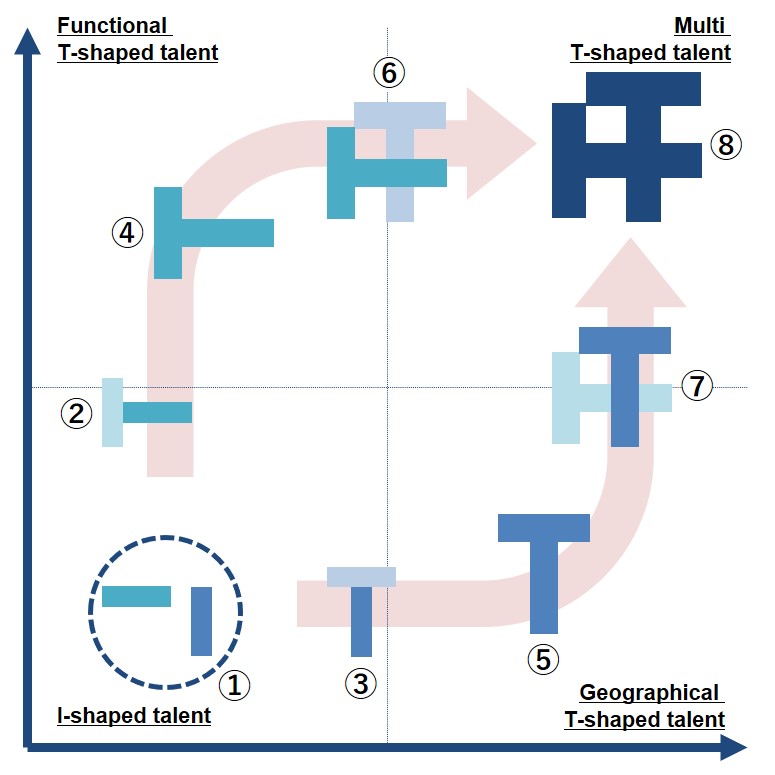 ① to ⑧ are milestones of career development in the organization.

The following chart shows the skill level and the expected positions of the milestones; 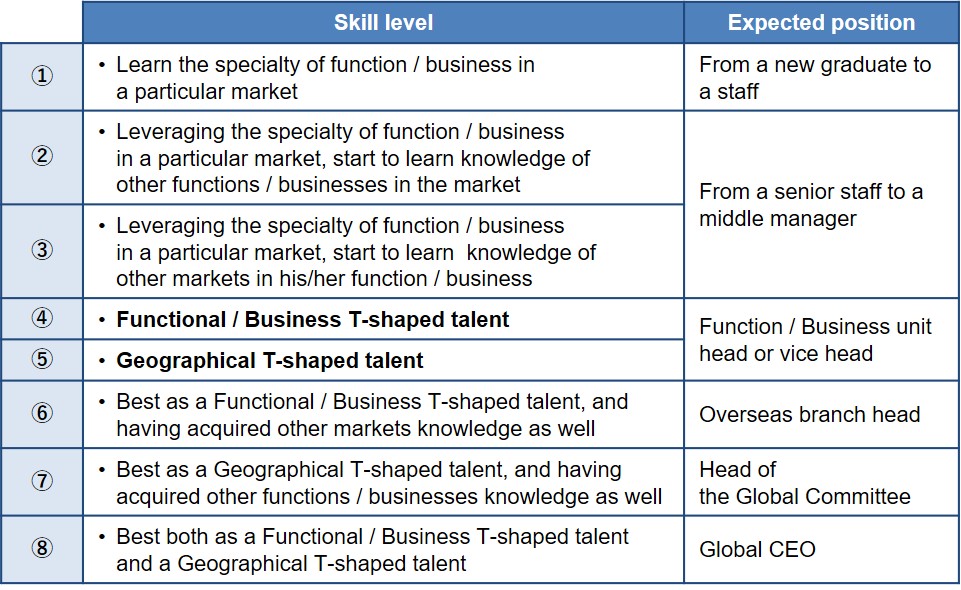 In the Top-down global organization, the career development paths are usually separated between the HQ and the overseas branches.

Or at least, the members of overseas branches do not have many chances to purse the career development in the HQ.

On the other hand, in the Networking-style global organization, the overseas members can purse both local market career path and the HQ function career path while staying in their own market.

The capability to attract and retain talents depends on the attractiveness of the organization and the wideness of talent network.

If managed properly, the overseas branches of the Networking-style global organization have both of them;

I believe the attractiveness and the wideness of talent network can hold out against the novelty and the strong brand of GAFA-like MNCs.

The transformation to the Networking-style global organization is not only the change of the organization structure.

Overall, the transformation requires both change of mindset and the daily actions of overseas members.

The members need to become more independent, flexible, willing to initiate new things and more responsible to the future of their branches.

Some may feel it is burden.

However, if the MNC can properly support the members to develop, most of them will enjoy their work much more in the Networking-style global organization.